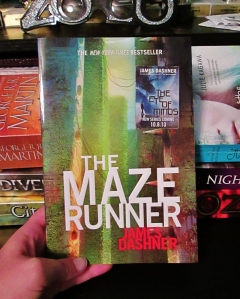 When Thomas wakes up in the lift, the only thing he can remember is his first name. His memory is blank. But he’s not alone. When the lift’s doors open, Thomas finds himself surrounded by kids who welcome him to the Glade—a large, open expanse surrounded by stone walls.

Just like Thomas, the Gladers don’t know why or how they got to the Glade. All they know is that every morning the stone doors to the maze that surrounds them have opened. Every night they’ve closed tight. And every 30 days a new boy has been delivered in the lift.

Thomas was expected. But the next day, a girl is sent up—the first girl to ever arrive in the Glade. And more surprising yet is the message she delivers.

Thomas might be more important than he could ever guess. If only he could unlock the dark secrets buried within his mind.

Okay, so recently there has been some uproar from the ‘original’ Maze Runner fans who are upset that people are only reading these books now that Dylan O’brien is starring in the movie. I’ll be honest and say that Dylan O’brien is in fact the reason I picked this book up, but not the reason I was interested in it. I’ve had this series on my Goodreads TBR list for a long time and Dylan was the final kick in the butt that got me to actually buy it. Dylan was the catalyst in my final decision to read this book, but James Dashner and his wonderful characters are the reason I will be finishing this series. I know this is going to get a bit tangential but I don’t think fans of this series should be as upset or outraged as they are at the fact that more people are reading this series because of Dylan O’brien or any of the other actors starring in this movie. I think it’s fantastic that because they’re making a movie from this book that more people are interested in reading it and in the end, more people are reading! That is so amazing! We should celebrate the fact that the media and the coverage of this book-to-movie transition is so well known that it is encouraging people to read. Whatever their reasoning behind picking up the book is, who cares, they’re picking up the book!

Sorry, I just needed to get that out there. Now, on to the review.

The main character, Thomas, wakes up surrounded by a bunch of boys in a maze with a pretty severe case of amnesia. Dashner was able to keep me just as confused as Thomas was until Thomas is able to get little bits and pieces of his memory back. I loved Thomas’ spirit and the way his character interacted with others. It was obvious through his actions what this character valued and how that made him different from the other Gladers. He is a very strong protagonist who was comfortable showing his weaknesses.

There were a lot of characters in this novel and what I enjoyed most was that, in such a short span of time and pages, I was able to get a really well rounded sense of who these other characters were and of their personalities. In that way, I was reminded of J.K. Rowling’s writing style from Harry Potter because she was always able to encompass so much of her peripheral characters into the main plot of the story so that each one felt unique as well as genuine.

The idea of the story, being stuck in a maze, knowing someone put you there, that this is all a test, you are trapped with these people and might be killed any day with only subtle memories of a world that is even worse than the maze, was awesome and terrifying. I’ve heard other reviews compare this novel to The Hunger Games, and although I could see that in perhaps the Games element of The Hunger Games, I think this novel was fundamentally different. Dashner was able to create suspense, thrill, and fear simply by indulging in the unknown. I thought that this was a very smart novel and the way the characters interact with the maze, the maps, their planning and survival skills, were unlike anything I’d ever read about before.

Although I was invested in the story from the beginning, I wasn’t hooked or ‘obsessed’ until the last fifty pages. For me, most of the book coasted around a 4 star rating, while the ending skyrocketed into a 5 star plot twist. The information you get on the very last page is meant to be shocking, however I was able to guess what was going to happen. Even though I wasn’t as surprised as I maybe could have been, I was excited enough to know that I will definitely be reading the next novel.

Whether you picked this book up because of the synopsis, a good review you read, or because Dylan O’brien will be in the movie, the bottom line is this: Dashner created a world and a concept unlike anything I’ve read to date. I’m so glad I finally picked up this book and was not disappointed. I can’t wait to see the movie and finish reading the series.

2 responses to “The Maze Runner Review”

Inquiring minds want to know...what do you think? Cancel reply

Any photograph, image, or book cover shown or displayed on this blog was taken, edited or created by the author of the blog unless otherwise stated.

Why can’t I find…